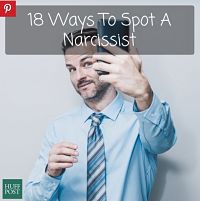 “…the signs of narcissism are … not always as obvious as media depictions would have you believe.”

“Chances are, you’ve encountered a narcissist. You know, that friend who somehow manages to revert every topic of conversation back to himself; the colleague who is always bragging about having the latest, greatest ____; the family member who thinks she is hotter, smarter and just generally better than you at everything.

“But sometimes the signs of narcissism are a little more nuanced. They’re not always as obvious as media depictions would have you believe. And yes, it’s possible to have some traits of narcissism without having full-blown, clinically diagnosed narcissistic personality disorder…

“When you think about the people you come into contact with every day – whether it be a friend, romantic partner or colleague – do any of the following seem to ring a bell?They’re likable — at least, at first glance.

– Not all narcissists are loud and proud. In fact, some are quiet and shy.

– They can often be found in leadership roles.

– They always manage to make the conversation about themselves.

– Not every story a narcissist tells is one of victory. But even in the stories of tragedy or failure, there’s an air of entitlement and victimization.

– Appearance is everything to them.

– On Facebook, they have lots of friends — and not a single bad picture.

– They are strongly averse to criticism.

– Excuses are a narcissist’s best friend.

– They leave a trail of wreckage behind them.

– And in that vein, they may be more likely to cheat.

– A narcissistic person probably has no idea he or she is a narcissist.

– You find yourself resorting to flattery just to maintain the peace with a narcissist.

– Narcissists are not low in self-esteem.

– Men are more likely to be narcissists than women.

Read the full article here: 18 ways to spot a narcissist

Academic research we highlighted recently found that laypeople actually have trouble identifying NPD, certainly in comparison to their ability to recognise schizophrenia and depression.