“More often than not, risk-takers underestimate the odds they face and … believe they are prudent, even when they are not.”

“The evidence suggests that an optimistic bias plays a role – sometimes the dominant role – whenever people or institutions voluntarily take on significant risks. More often than not, risk-takers underestimate the odds they face and, because they misread the risks, optimistic entrepreneurs often believe they are prudent, even when they are not.” (From FinanceProfessor.com)

In the real world, such misplaced optimism can have serious consequences.

“Leaders of large businesses sometimes make huge bets in expensive mergers and acquisitions, acting on the mistaken belief that they can manage the assets of another company better than its current owners do.

“Misguided acquisitions have been explained by a “hubris hypothesis”: the executives of the acquiring firm are simply less competent than they think they are.”

Originally written for Bloomberg.com, the articles are a little hard to track down. However, currently they can be found here: Bias, blindness and how we truly think

The FinanceProfessor.com preview is here 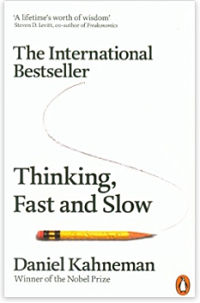 Developing this work further, Kahneman has also written ‘Thinking fast and slow’ which explains the two systems that drive the way we think.

“System 1 is fast, intuitive, and emotional; System 2 is slower, more deliberative, and more logical.” (From BizKnowledgeWatch, the IESE Library Blog.)

“Kahneman exposes the extraordinary capabilities – and also the faults and biases – of fast thinking, and reveals the pervasive influence of intuitive impressions on our thoughts and behavior.

“The impact of loss aversion and overconfidence on corporate strategies, the difficulties of predicting what will make us happy in the future, the challenges of properly framing risks at work and at home, the profound effect of cognitive biases on everything from playing the stock market to planning the next vacation – each of these can be understood only by knowing how the two systems work together to shape our judgments and decisions.” (From BizKnowledgeWatch, the IESE Library Blog.)

Published by Allen Lane, London, the book is available for purchase here: Thinking fast and slow