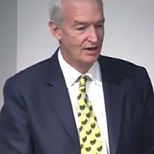 “Richard Branson is a handy starting point from which to try to explore the media’s involvement in this game because it is substantial. There’s no question that a lot of hubris is very handsomely stoked by the media.”