The dark side of transformational leadership: A critical perspective. (2013) 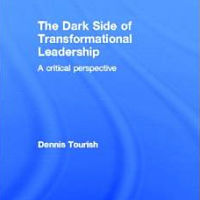 “..confronts the orthodoxy that transformational leadership is a ‘good thing’ by illustrating how it can encourage narcissism, megalomania and poor decision-making at great expense to organizations

Dennis Tourish, Professor of Leadership and Organization Studies at Royal Holloway, University of London. Fellow of the Leadership Trust Foundation and a co-editor of the journal Leadership.

Most leadership research presents leaders as heroic, charismatic and transformational ‘visionaries’. Despite fundamental mistakes which have, arguably, directly led to global economic recession, it is often still taken for granted that transformational leadership is a good thing,

The Dark Side of Transformational Leadership confronts this orthodoxy by illustrating how such approaches can encourage narcissism, megalomania and poor decision-making on the part of leaders, at great expense to those organizations they are there to serve.

The author uses a number of case studies to illustrate the perils of transformational leadership, from the Jonestown tragedy in 1978 when over 900 people were either murdered or committed suicide at the urging of their leader, to an analysis of how banking executives tried to explain away their role in the 2008 financial crisis