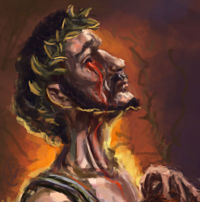 “Concern about hubris is deeply embedded in our genes. Humans might have evolved ways to … prohibit behaviors which threaten them. Strivings for rank and power can be threats, which is why dire warnings about hubris have appeared throughout history.

The repeated telling of cautionary tales about hubris throughout time and across cultures suggests that it’s a concern that is deeply embedded in our genes. As one example, the author references Oedipus Rex, the play from fifth-century BCE Athens in which a magnificent king, once beloved by his people and favored by the gods, is transformed into a blind outcast . . . the consequence of his hubris.

“These stories and myths invariably alert us to the dangers linked with those who, in their strivings for power and rank, have violated social sanctions established to protect the welfare of others.”

The author then notes that recent neuroscientific studies about fairness, cooperation, and reciprocity suggest that humans are programmed to protect pro-social behavior.

Given other emerging evidence that prosocial behaviors are critical for social survival, she concludes that humans as a species might have evolved a means to monitor and prohibit behaviors which threaten them.

Strivings for rank and power can be dangers to prosocial behavior, which is why dire warnings about hubris have appeared down the centuries.

The paper concludes by arguing that the ancient concept of hubris has contemporary clinical significance. It proposes however that “we distinguish hubris from pride, as they are related emotional states that drive different goal-directed responses in moral decision-making.”