Hubris: Why economists failed to predict the crisis and how to avoid the next one. (2015) 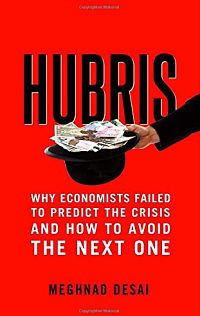 “…underscores the contribution of hubris to economists’ calamitous lack of foresight, and makes a persuasive case for re-engagement with the history of economic thought.

“The failure of economists to anticipate the global financial crisis and mitigate the impact of the ensuing recession has spurred a public outcry. Economists are under fire, but questions concerning exactly how to redeem the discipline remain unanswered.”

Lord Desai “investigates the evolution of economics and maps its trajectory against the occurrence of major political events to provide a definitive answer.

“Desai underscores the contribution of hubris to economists’ calamitous lack of foresight, and he makes a persuasive case for the profession to re-engage with the history of economic thought.

“He dismisses the notion that one over-arching paradigm can resolve all economic eventualities while urging that an array of already-available theories and approaches be considered anew for the insights they may provide toward preventing future economic catastrophes.”

Access the book here: Why economists failed to predict the crisis

Read Stewart Lansley’s review Lord Desai’s book here  “The idea of equilibrium is a dangerous delusion.. The accuracy of his pessimistic conclusion remains to be seen.”

Lord Desai discussed his book at a public lecture held at the LSE, Aldwych, London on 27 May from 6:30pm to 8pm. He was joined by Stephen King, Group Chief Economist at HSBC. Details here: Lord Desai public lecture

A Podcast of the event is available here