Humility, hubris and the curse of self-deception. (2015) 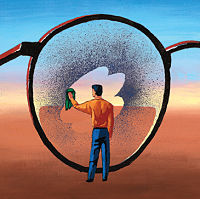 “What ultimately determines an organisation’s fate is whether key people remain open to seeing beyond the familiar, so what they might become in the future is not stifled by what they have been in the past.

Geoff Marlow (geoff@geoffmarlow.com, @geoffmarlow) is a Founding Member of the Advisory Board of the Daedalus Trust and a former UK Director of the Society for Organisational Learning. His professional specialism is helping organisations, individuals and ideas to flourish by escaping the hidden traps holding them back.

Another in an occasional series of contributions from members of our Advisory Board and other friends of the Daedalus Trust. Published online 3 August 2015

“The true journey of discovery lies not in exploring new landscapes, but in having new eyes”[1]

Of all the many insights from decades of organisational learning research, application and practice, one of the most powerful and profound is that the foundation of any human system, community or organisation rests on the mindsets, attitudes and outlook of its people.

Working with this insight in organisations throughout Europe, Asia and the US over the past 30 years, I’ve seen time and again that whether organisations flourish and grow, or wither and die comes down to one simple thing. What ultimately determines an organisation’s fate is whether key people remain open to seeing beyond the familiar, so what they might become in the future is not stifled by what they have been in the past.

Seeing beyond the familiar is not as easy as it may sound because of the deeply intertwined and interdependent relationship between seeing (perception of reality) and being (conception of self). Put simply, when our ‘being’ narrows, our ‘seeing’ becomes similarly constricted and constrained.

For example, the conception of self that “I am the expert” will prevent me from seeing any merit in new ideas that could render my current expertise obsolete. Max Planck, founder of quantum theory clearly recognised this problem: “A new scientific truth does not triumph by convincing its opponents and making them see the light, but rather because its opponents eventually die, and a new generation grows up that is familiar with it”[2].

One of the most common examples of this phenomenon for leaders is “I am the decision maker”. Fall into this trap and you will no longer be able to see when, and in which situations, others are better placed to make decisions. You then end up becoming a decision making bottleneck, constraining and holding the organisation back.

This Curse of Self-Deception that ‘I’m the expert’, ‘I’m the decision maker’ or anything similarly self-deceiving is the doorway through which we fall into what I call seeing-being traps. The way to avoid or escape these traps is to cultivate a sense of self based on a fundamental truth about the limitations of human perception – that none of us ever sees the whole of anything.

We’re caught in a seeing-being trap when we buy into the self-deception that what we see is “the whole truth”. We escape or avoid these traps by developing the awareness that we each see an incomplete but valid aspect of a larger overall reality – our own personal “2D take on 3D reality”.

Perhaps the most prevalent and pervasive seeing-being trap of all is “I am right”. Being under this self-deception automatically alienates others who see different “2D takes on 3D reality” and by cutting ourselves off in this way we impoverish our own understanding, poison our relationships and prevent our organisations from flourishing.

It is remarkably easy to fall into a seeing-being trap, and only by developing the capacity to escape and avoid such traps can leaders ensure their career trajectory is towards the ‘Level 5 Leadership[3]’ characterised by a paradoxical mix of personal humility and professional will instead of the overconfidence in one’s own judgement and contempt for others that typifies ‘Hubris Syndrome’[4].

When those in leadership positions fall into, and then fail to escape these traps, this self-deception not only curses them as individuals it also eats away at the fabric of their organisation like a cancer, sapping its vigour, undermining its vitality and ultimately risking its very survival.

So what can we do in practice to be more ‘Level 5’ than ‘Hubris Syndrome’? These six practices develop the internal strength to avoid and escape seeing-being traps in ourselves and others:

Developing mastery in these six states of being – which form the acronym ESCAPE – enables organisations, individuals and ideas to flourish and leads to often surprisingly rapid breakthroughs.

In my experience a good place to start is by focusing on being enthusiastic – which is the drive behind ‘professional will’- and being curious – which develops the ‘personal humility[8]’ that together characterise the ‘Level 5’ leader.

Working on these two is like a shot in the arm that not only stimulates development of the other four but is also the quickest and surest way to inoculate yourself against Hubris Syndrome.

Download this blog as a pdf here: Humility Hubris and Self Deception 20150731

[8] Not the “humility” that says “I am nothing” – that’s just the flip side of the self-deception that “I am everything”. True humility is when sense of the self is based on authentic embodied human strengths.