“Without humility, the mighty fall hard, and the collateral damage is something to behold.”

Another in an occasional series of contributions from members of our Advisory Board and other friends of the Daedalus Trust. Published online 1 September 2015

The sudden and catastrophic collapse of the high profile charity Kids Company has provided a perfect story for the British ‘silly season’, featuring many of our favourite tropes: first, there’s a colourful, outspoken, emotional, made-for-TV heroine (the CEO, Camila Batmanghelidjh).

Then there’s the political intrigue (Prime Minister David Cameron was one of a host of the great and the good queuing up to be associated with the charity and provide it with funding, despite official concerns – until the embarrassment finally became too acute).

There’s a sight we all naturally marvel at, as the previously mighty fall, and we check out the associated impact on a host of famous faces who once queued up to be associated with a modish brand.

And then – last but by no means least – there’s the truly tragic effects on the charity’s staff and clients, whom everyone agrees are the true innocent victims of the morality play at the worst of possible times as austerity cuts hit local government coffers. One feels particularly for the staff, who suffer their own personal ruin while feeling closely responsible for their clients whom they can no longer help.

All this provides fodder for Brits’ favourite hobby of hypocritical self-righteous indignation at the folly of others, mixed with excited mock horror at the spicy hints of illicit sexual activity, drug use, corruption and waste.

Predictably enough, this story has allowed those on all sides to align themselves with (self) righteousness. There’s something for everyone here, and that alone means the story will run and run.

For those on the political left, the focus of the story remains the sudden abandonment of the needy youth that the charity sought to serve, in its unique way, and a chance to reassert their own (impeccable) credentials as supporters of the underprivileged and the counter culture. The focus for this side of the story is the unmet needs of the kids themselves, and the government’s failure in a time of austerity to provide funds or capabilities through the public sector that could match Kids Company’s extraordinary and unconventional provision.

Of course it’s the Guardian that delivers most of the op-ed on this angle, such as the piece on 9 August by Henry Porter modestly entitled “I saw the great work Kids Company did myself. That’s why I mourn its passing”. Many of the diverse Establishment that the estimable Ms Batmanghelidjh came to know are penning such pieces, partly because they recognise the amazing achievements of the organisation over 19 years, partly because one suspects they are dangerously close to the vortex of the sinking ship and need to protest their own innocence. 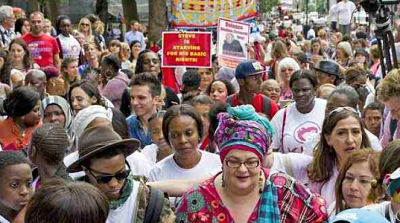 The challenge many are visibly facing here is to what extent to continue to support Camila personally in the wake of some difficult questions; far easier to remain on the side of supporting the intention and purpose of the organisation she founded. But the strains are showing.

For the right, it’s a morality tale of governance failure with a hint of smugness that such an unusual and challenging organisation turned out to be badly managed.

In this reading, it’s comforting old-fashioned virtues of good governance, sensible housekeeping and financial probity that were not attended to, and the fingers point not only at the CEO but the Board, chaired (in another gift to the British press) by the high profile BBC executive Alan Yentob. The Daily Mail has, metaphorically speaking, had to put on an extra pair of plastic panties at the prospect of being able to crucify so many arch enemies at once, while the Daily Telegraph solemnly intones that Kids Company’s ‘egalitarian’ model is actually autocracy says ex employee.

So, what can we learn from all this? Is Camila to blame for her own demise (and those of her staff and clients)? Or is it all the fault of shadowy, powerful political figures who backed her once but lost their nerve when things became difficult?

I was not personally involved with Kids Company, but I know several people who are close to them, and I am a charity trustee myself. I’ve been the Treasurer of a large charity with troubled finances, and one of my close friends was the CEO of another charity that was forced to shut when government funding collapsed suddenly.

I’ve also been consulting with various friends and colleagues for their observations and thoughts over the last few days, and here are a few early conclusions based on our experiences:

Camila’s status as founder/CEO, coupled with her strong personality and drive, has clearly been hugely helpful in gaining Kids Company the exposure and opportunity that helped them fund their activities and unique approaches to their clients’ needs over the years. But along with such success, and the praise and attention that it creates, goes the risk of individual and collective hubris, which I have written about elsewhere, This in turn tends to make leaders blind to risks and ignore warnings and concerns expressed by staff and others, hastening the crises that these days can envelope an organisation almost overnight.

Boards and regulators should be particularly careful in such circumstances. CEOs want to be supported and told what a good job they are doing. But that is not the board’s only job. We need to know more about whether Alan Yentob and his board asked the right questions and showed sufficient concerns about the culture that Camila was creating in her organisation; certainly on the surface it looks like there was not enough humility or openness to challenge.

Charities are particularly prone to believing that their worthy purposes mean whatever they do, and however inefficiently or amateurishly they do it, is justified. But too many charities are being run with insufficient reserves, meaning that (given their inability to borrow money) many are at grave risk of running out of cash quite suddenly. It’s a duty for charity trustees not to keep running the charity when it’s insolvent, but even if you unwisely/illegally ignore this requirement, you really can’t keep going once the bank account is empty.

We will hear more over the coming months about how well the board scrutinised these matters at Kids Company, but it certainly seems reckless to sustain a cost base of over £800,000 a month with negligible reserves. The Guardian reported this week that two finance chiefs had quit over the repeated failure to address this issue.

If this is true, it’s pretty shocking, and may lead to demands for more stringent reforms over charity governance. Perhaps that’s a good thing.

The culture of Kids Company seems to have become truly hubristic over time. Lord David Owen has written compellingly for years about the features of hubristic leaders detailed below. Given recent examples in the private sector, it’s not fair to point this accusation only at Kids Company, but surely some of these elements were at play here too:

1. A narcissistic propensity to see their world primarily as an arena in which to exercise power and seek glory.

2. A predisposition to take actions which seem likely to cast the individual in a good light – ie. in order to enhance image.

3. A disproportionate concern with image and presentation.

4. A messianic manner of talking about current activities and a tendency to exaltation.

5. An identification with the nation, or organization to the extent that the individual regards his/her outlook and interests as identical.

6. A tendency to speak in the third person or use the royal ‘we’.

7. Excessive confidence in the individual’s own judgement and contempt for the advice or criticism of others.

8. Exaggerated self-belief, bordering on a sense of omnipotence, in what we personally can achieve.

9. A belief that rather than being accountable to the mundane court of colleagues or public opinion, the court to which they answer is: History or God.

10. An unshakeable belief that in that court they will be vindicated.

11. Loss of contact with reality; often associated with progressive isolation.

13. A tendency to allow their ‘broad vision,’ about the moral rectitude of a proposed course, to obviate the need to consider practicality, cost or outcomes.

14. Hubristic incompetence, where things go wrong because too much self-confidence has led the leader not to worry about the nuts and bolts of policy.

It’s for others closer to the action to comment on whether these criteria were at play in this case, but what we know is that hubris seems to always precede these really big crises and the nemesis that Kids Company is currently experiencing.

In Greek tragedy, nemesis was seen as shady but unavoidable; the only real way of guarding against it was to contain hubris and associated pride and lack of humility. It does not seem that Kids Company fully realised this risk.

4. The real losers in organisation failures are clients and staff

Embarrassing and distressing as these crises are for the leaders, boards and associated famous names, it’s the little people who will really suffer here.

The bitterness we see in the press from this disappointment focuses on the leadership as well as the government or other external agencies. The CEO seemed to believe it was all somebody else’s fault when she was interviewed: the press had muddied the waters and put donors off. But deep down I suspect it’s all too clear that a bit more caution on growth, cost containment and a better and more diverse funding strategy might have meant the crisis never came. Certainly the personal criticisms are growing, including from those keen to divert attention away from the PM’s involvement in some distinctly odd funding decisions towards the end of the charity’s life.

5. Regulation and governance may be dull, but they matter

Ultimately, once the executive are gone, the staff fired and the poor clients forgotten, it’s the board and the regulators who come into the spotlight. I suspect times will be profoundly uncomfortable for many individuals on the Kids Company board and at the Charities Commission.

Alan Yentob’s role as Chairman is particularly interesting. He was not keen to talk to the press as the crisis evolved, suggesting a lack of leadership and ownership despite the fact that technically Camila is employed by the board, not vice versa. It looks bad for him.

What those of us in trustee positions need to learn from this tragedy, I don’t yet know, but I suspect I won’t be the only one looking harder at the balance sheet, asking tougher questions about operational efficiencies and costs, and asking for further assurance that our collective legacy in our organisations will be a good one.

We’ll be asking for evidence, not just the beliefs of the executive about how we can be successful.

Like the Greek chorus at the end of the play, we are now the ones left to wonder on the catastrophe we have witnessed.

The famous final lines of Oedipus The King seem even more apt than ever:

He was the most powerful of men.
All citizens who witnessed this man’s wealth
were envious. Now what a surging tide
of terrible disaster sweeps around him.
So while we wait to see that final day,
we cannot call a mortal being happy
before he’s passed beyond life free from pain.

Perhaps that’s too dismal a thought. But there are surely lessons here, just as there were in the demise of Lehman Bros or Enron, for the thoughtful leader and board member.

Without humility, the mighty fall hard, and the collateral damage is something to behold.