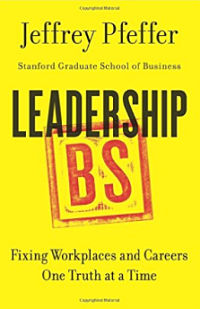 “Pfeffer sets the record straight on the oft-made prescriptions for leaders to be honest, authentic, and modest, tell the truth, build trust, and take care of others,”

“In his latest book, Pfeffer writes that colleagues have chided him for studying scorpions, spiders and cockroaches: unpleasant leaders, rather than the inspirational bosses whose stories fill much of the rest of the literature,” reports Andrew Hill of the Financial Times,

“Prof Pfeffer prefers to describe himself as a realist…..

“The “leadership BS” he attacks … is generated mainly by the industry founded on such wishful thinking. It makes discomfiting reading for anyone (including journalists) who has extolled the virtues of modest, authentic, truth-telling, trustworthy leaders.

“To paraphrase Prof Pfeffer’s main themes: bosses are not modest, leaders are bound to lie (even “great” leaders such as Abraham Lincoln or Nelson Mandela), authenticity is overrated and the gap between aspiration and reality is one reason that trust in leaders and leadership gurus has evaporated.”

“One of his depressing conclusions is that leaders and those who write about them — the former because they are self-interested narcissists, the latter because their misguided preaching is so popular — will continue to do fine. Instead, he says his concern is for “the human beings who have truncated careers and career derailments, and who work in places where they are literally exposed to conditions that are as toxic as second-hand smoke”.

The publisher’s website notes: “(Pfeffer) shines a bright light on the leadership industry, showing why it’s failing and how it might be remade. He sets the record straight on the oft-made prescriptions for leaders to be honest, authentic, and modest, tell the truth, build trust, and take care of others. By calling BS on so many of the stories and myths of leadership, he gives people a more scientific look at the evidence and better information to guide their careers.”

You may also be interested in an article by by Alan Murray published at Fortune.com on 15 September 2015: Should leaders be modest?