Napoleonic leadership: a study in power. (2015) 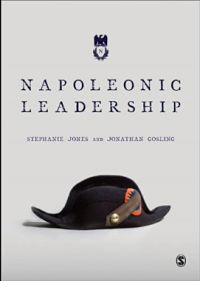 “200 years after his defeat, what lessons can we learn from his successes and his failures?

“What precisely was it about Napoleon that made people want to follow him?

“How did his name come to be synonymous with brilliance, legend and glory despite displaying opportunistic and manipulative tendencies, and regularly deserting those that followed him?

“200 years after his defeat, what lessons can we learn from his successes and his failures?

“As we mark the 200th anniversary of the Battle of Waterloo, this fascinating study on leadership and power tackles the questions that continue to intrigue and mystify. As now, power was gained and held by political manipulation, patronage, fear, putsch, charisma, popular vote and the new idea of meritocracy.

“Through the inclusion of Reflections and Questions, Jones and Gosling also highlight some important lessons for current and future managers and leaders.”