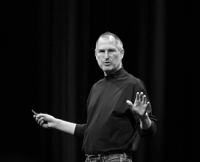 ‘Leaders’ and ‘heroes’ are so tightly linked in our semantic construction of the world that speaking of one easily evokes associations with the other.

The advent of seemingly larger-than-life leaders such as Steve Jobs keeps reinforcing the “heroic perspective” of leadership.

“(But) heroic leaders in the form of celebrity CEOs are of dubious value. (And) belief in such qualities has been shown to be dangerous to the leader in question as well as to organizational performance and long-term returns on.”

With the widespread knowledge of the illusory and potentially dangerous consequences or managerial heroism, why do these heroic perspectives keep re-emerging?

The authors propose that ‘leaders’ and ‘heroes’ are so tightly linked in the collective semantic construction of the world that speaking of one easily evokes associations with the other.

They hypothesize, and find, that many people have unrealistic expectations of leaders and confuse leadership with heroism.

This has “consequences for how people perceive their closest superiors” in the real world. Many subordinates score their superiors significantly lower on heroism than the superiors themsleves.