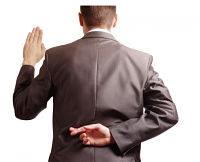 “Across five experiments … we found strong evidence that the powerful are more likely to engage in moral hypocrisy than are people who lack power.

In politics, newspapers repeatedly report on government figures who have extramarital affairs despite decrying the breakdown of family values or who use public funds for private benefits despite condemning governmental waste. This pattern of sanctimony combined with lechery and gluttony has led some observers to suggest that double standards are the hallmark of politicians.

In business, captains of industry have recently asked the government for billions to protect their banks, industries, and companies from economic ruin, but at the same time have secured for themselves huge financial while continuing to preach about the divinity of free-market capitalism.

The research reported in this paper here aimed to test whether there is a direct, causal link between the experience of power and moral hypocrisy.

“Across five experiments, irrespective of how power was manipulated or hypocrisy was measured, we found strong evidence that the powerful are more likely to engage in moral hypocrisy than are people who lack power.”