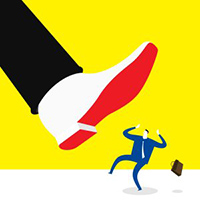 “…when there’s ambiguity in the context, people convince themselves that they deserve more resources than others, a form of motivated reasoning that in turn facilitate[s] their self-serving behavior.”

“…feeling entitled to a larger share of a resource might come not from objective assessments of reality but rather from what social scientists call motivated reasoning. ”

“Motivated reasoning occurs when people “selectively notice, encode, and retain information that is consistent with their desires.””

“Researchers have examined how people can engage in self-serving behaviors while convinced of the rightness and fairness of doing so. Few studies, however, have explored the circumstances in which this type of selfishness — one that comes with a sense of entitlement and justification — is likely to arise. ”

“The resulting [economic] crisis was driven by self-focused bankers who were rewarded for their high-risk practices, and the most profoundly affected individuals came from minority racial groups.”

Read the full article, including the several strategies to prevent such contexts from prompting motivated reasoning, here: http://sloanreview.mit.edu/article/putting-an-end-to-leaders-self-serving-behavior/