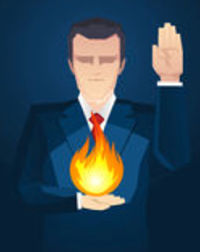 “How you can gain more power, and why you should be leery.”

“You have to be careful with power,” says Stanford Graduate School of Business professor Brian Lowery. “Think of it as fire. It’s useful, but it’s also dangerous.”

As part of a Stanford Executive Program course, Lowery describes different sources of power; simple ways people can obtain more of it; and the fallbacks of mismanaging that power.

To be seen as more powerful he suggests a range of “dominance moves”. They range from “looking large” to “reacting with anger rather than sadness when something goes wrong.  Anger is seen as the more powerful emotion of the two.”

Lowery warns that power doesn’t always have a positive effect however. “The powerful might rely on their own sense of morality in a decision, but if they’re already less inhibited and more inclined to think optimistically, they can run the risk of doing something illegal or dangerous, hurt negotiations, or harm their reputations.

“…as your power grows, have people to help you check your own behavior.”

Access the full article here: The dangers of power.