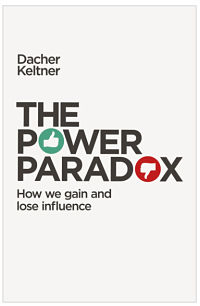 “…compassion and selflessness enable us to have the most influence over others and the result is power as a force for good in the world.”

Dasher Keltner, professor of psychology and director of the Berkeley Social Interaction Lab, University of California

“The power paradox is this: we rise in power and make a difference in the world due to what is best about human nature, but we fall from power due to what is worst. We gain a capacity to make a difference in the world by enhancing the lives of others, but the very experience of having power and privilege leads us to behave, in our worst moments, like impulsive, out-of-control sociopaths.

“How we handle the power paradox guides our personal and work lives … Its ripple effects shape the patterns that make up our families, neighborhoods, and workplaces, as well as the broader patterns of social organization that define societies and our current political struggles.”

…Keltner argues that compassion and selflessness enable us to have the most influence over others and the result is power as a force for good in the world.

…(He) lays out exactly in twenty original “Power Principles” how to retain power; why power can be a demonstrably good thing; when we are likely to abuse power; and the terrible consequences of letting those around us languish in powerlessness.

From a review by Maria Popova in brainpickings.org:

“There are many fine things which we cannot say if we have to shout,” Thoreau wrote as he contemplated how silence ennobles speech. In the century and a half since, we have created a culture that equates loudness with leadership, abrasiveness with authority. We mistake shouting for powerful speech much as we mistake force for power itself. And yet the real measure of power is more in the realm of Thoreau’s “fine things.”

So argues UC Berkeley psychologist Dacher Keltner in The Power Paradox… Drawing on a wealth of social science studies and insights from successful teams ranging from companies like Pixar and Google to restorative justice programs in San Quentin State Prison, he demonstrates “the surprising and lasting influence of soft power (culture, ideas, art, and institutions) as compared to hard power (military might, invasion, and economic sanctions).”

Access Popova’s review here: The Power Paradox: the surprising and sobering science of how we gain and lose influence.