The Silo Effect: The peril of expertise and the promise of breaking down barriers. (2015) 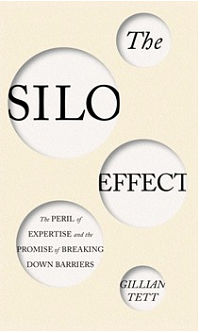 “…no principle is more fundamental to the market economy than the division of labour.

“…And yet, as anyone who has ever worked in a large corporation knows only too well, that principle has its dark side as well. Specialisation improves efficiency – but it also leads to tunnel vision and blind spots. Organising companies into discrete divisions makes responsibilities clearer – but it also leads to bureaucratic rivalry, corporate infighting, and the left hand not knowing what the right hand is doing. In short, the miracle of the division of labour can all too easily degenerate into the nightmare of The Silo Effect.

“…. In the 1970s and 1980s, Sony was a watchword for innovation with its Walkman and its Trinitron TV. By the 1990s, however, the company had grown ungovernably large, so its new chief executive Nobuyuki Idei deliberately reorganised the unitary corporation into 10, and then 25, sub-companies.

“In the short term, efficiency improved and profits rocketed. Over time, however, the reforms began to backfire. Internal competition killed collaboration and innovation slowed. When the digital age arrived, silo-ridden Sony was comprehensively bested by Apple, with its famously totalitarian ethos and relentless commercial focus.

“Organisational silos are bad enough. Even more damaging are silos of the mind. These are the unexamined assumptions, the conventional categorisations and the ingrained patterns of thought that underpin our everyday decision-making.

“…Managers at UBS took it for granted that their models adequately captured the risks on their books. They got a nasty shock when they lost $30bn on mortgage-backed securities between 2007 and 2009.

“Is it possible to institutionalise .. radical open-mindedness? Tett tells the stories of two major US corporations that are trying.

“The first is Facebook, where regular staff rotation and company-sponsored hackathons have created an atmosphere of permanent revolution. …Tett’s other example, the Cleveland Clinic, comes from the intrinsically specialised field of medicine. It too has been conspicuously successful at promoting cross-disciplinary collaboration. There, she finds that the financial incentives generated by Cleveland’s unusual (for the US) partnership structure play a pivotal role.”

From the Financial Times Review:
by Felix Martin
28 August 2015