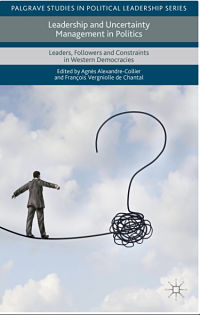 “Political leadership has traditionally been less analysed in the UK than in the United States, with its presidential system. Yet Tony Blair’s style of leadership and decision-making in foreign policy have been probed more than most of his predecessors’, with the possible exception of Margaret Thatcher, in the public debate as well as in the academic literature. No less than three official reports (Butler, Hutton, Chilcot, though still not published at the time of writing) have been partly devoted to his decision-making.

“This is both because he successfully transformed the Labour party and reversed its electoral fortune in the 1990s and because of the controversies surrounding the way he took the decision to send British troops alongside Americans to invade Iraq in 2003.

“In establishing a new doctrine for foreign military intervention …. Blair was able to become a ‘game-changer’, in the sense, established in the introduction to this volume, that he twisted the usual functioning of institutions to reach his goal. But as the war proved a military disaster and its popularity waned, he was then accused of increasing the ‘presidentialisation’ of British Prime Ministers already blamed on some of his predecessors and seen as contrary to the constitutional principle of collective responsibility.”