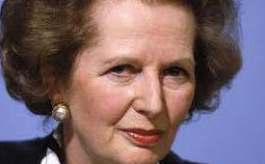 “Margaret Thatcher showed that biology had not handicapped women from achieving dominance in the human tribe,” writes Professor Ian Robertson, holder of the Chair in Psyhcology at Trinity College Dublin.

“(She also) taught us that women leaders are not immune to the distorting – and sometimes corrupting – effects of power that we have seen throughout the ages in men.

“Margaret Thatcher apparently was a great admirer of Tony Blair, and vice versa, which is not surprising since both these talented people suffered serious distortions of their cognitive and emotional functions as a result of the power they managed to garner over long periods in office.

“My own research of the scientific literature suggests that women may be somewhat less at risk for this, and that we need many more women in positions of power, not just in politics but also in business and  other domains of life.”