About Us
About Us

There is a growing body of opinion that the exercise of power can distort thinking and create personality changes in leaders that affect their decision making. The Daedalus Trust was founded to raise awareness of such changes and understand them better.

The Daedalus Trust, founded by Lord David Owen, was a registered UK charity from 2011-2017.

The Trustees in 2017 believed the time was right to embed the Trust in an academic setting but not in a University Department. They decided to merge the Trust with the Maudsley Philosophy Group that is likewise registered with the Charity Commission.

This website will remain in the name of the Daedalus Trust under the aegis of the Maudsley Philosophy Group.

The Trust’s mission was primarily to raise awareness of hubris and Hubris Syndrome in public and business life, and secondarily to encourage multi-disciplinary research and generate financial support to seed-fund worthwhile research projects.

The Trust actively pursued its mission in a variety of ways that included:

All these events and services were designed to help boards, directors, managers, recruiters, academics, business thinkers and journalists identify, mitigate or manage the catastrophic effects hubris can have.

The Trustees in 2017 believed the time was right to embed the Trust in an academic setting but not in a University Department and decided to merge the Trust with the Maudsley Philosophy Group (MPG) that is likewise registered with the Charity Commission.

The MPG’s aims and interests overlap with the interests of the Daedalus Trust and the Group will plan to add specific wording to their objectives registered with the Charity Commission to show that they are widening their interests to specifically include a focus on research into personality traits associated with leadership. One or two Daedalus Trust members will become Trustees of MPG to ensure some continuity but the Trust itself ceased as a separate entity and a charity as from October 2017.

It is right that a much younger grouping now take up the cudgels and it will be very helpful for the work of the Trust to sit within a broader umbrella group encompassing mainly psychiatrists but also psychologists and neuroscientists.  With MPG’s link to King’s College it may also be much easier for them to attract grants for research work.

The website will remain in the name of the Daedalus Trust under the aegis of the Maudsley Philosophy Group. The MPG’s website is http://maudsleyphilosophygroup.org which will be updated over the coming months to reflect its additional orientation towards the work of the Daedalus Trust. 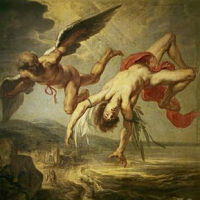 “A good case could be made… that hubris is at the root of the ills that have plagued businesses in recent years.” Mathew Hayward, associate professor of management, University of Colorado.

Back to the top

In Greek mythology, Daedalus advised his son Icarus to be bold enough to fly but not to fly so high that the sun’s heat would melt the wax of the wings he had fashioned for him.

Thrilled by his initial aerobatic successes, Icarus ignored his father’s advice and paid the ultimate price – a sobering demonstration of unjustified self confidence and the abuse of power.