“…Hubris Syndrome could be a consequence of deficient decision- making under chronic stress.” A little bit of stress he says is good, probably improves decision-making, but too much will deplete the system.”

Extract from the Rt Hon Lord Owen speech, delivered on the occasion of The Geoffrey Jefferson Lecture, April 2018:

“In short, Hubris Syndrome is an identifiable change in personality, a trait rather than a disorder, occurring in individuals who occupy positions of power and influence. It is a syndrome of people who are not diagnosed as having any identifiable psychiatric condition. In that sense they can before they become powerful often be described as ‘normal’ and may have been chosen for their position of power by well-designed selection procedures, or elections. The onset of the syndrome bears some relationship to the time they have exercised power and in some cases the diagnostic signs and symptoms seem to ease with the passing of power.

“The Greeks were very clear that hubris was a word describing a very unattractive feature in a person’s behaviour, often expressed in contempt for others. Contempt, when present in a person of power, is almost always a confirmation of hubris syndrome.

“Bankers and businessmen, not just politicians, become susceptible collectively to what Keynes called ‘animal spirits’. Alan Greenspan, the former chairman of the US Federal Reserve Board, called it ‘irrational exuberance’ – note the word ‘irrational’. Yet booms and busts go with the territory of risk-taking capitalism: sweep it all aside and you are left merely with a bureaucracy. What is needed for capitalism to be tolerable in the 21st Century are specific solutions and greater sanctions, otherwise we can be certain that the ‘animal spirits’ will return. Greed, hubris and exuberance need to be kept in check.

“There is a fascinating relationship between hubris and pathological gambling which we describe in the article in Brain to which I have referred earlier. (Owen and Davidson, 2009).

“The Somatic Marker Hypothesis (SMH) (Bechara and Damasio, 2005; Damasio, 1994) and the associated program of research (Dunn et al., 2006) provides physiological evidence for the visceral (‘gut feel’) affective responses in decision making under uncertainty and risk. In 2009 in a lecture at the Institute of Neurology honouring the late David Marsden FRS, with whom I worked on beta-blockers at St Thomas’s Hospital Medical Unit from 1966-68, I suggested learning more about the hypothesis from studies about the secondary prevention of post-traumatic stress disorder, PTSD, and the immediate treatment with the beta-blocking drugs. The fact that after a long argument PTSD has been accepted as acquired has undoubtedly helped the claim that Hubris Syndrome is acquired. But we need more research in all of these areas.

“A few years ago Professor Kapur, then Executive Dean of the Institute of Psychiatry, Psychology and Neuroscience, IoPNN, at King’s College London, drew to my attention a paper on the effects of a placebo induced dopamine release in Parkinson’s Disease (Lidstone et al, 2010). An article by Erik Vance (2014) in Discover magazine makes many things clearer in layman’s language about what Sarah Lidstone, who had led the brain-imaging experiment, had done and I describe this in some detail in the Foreword to The Intoxication of Power. Interdisciplinary Insights.

“As you all know, Parkinson’s patients are especially susceptible to the placebo effect — the phenomenon by which a condition improves solely because the patient believes treatment has occurred. When Lidstone’s team analyzed their patients’ brain activity, they found the PET images showed dopamine, in Vance’s words, “flooding the synapses in the crucial motor control region of their brains, just as surely as from a dose of medication. It was the first time placebo responses in Parkinson’s disease had been definitively linked to a natural burst of dopamine.”

“Is this cementing of expectations an explanation for how Hubris Syndrome appears to stay for months and years in someone who has acquired it but may recede when power is no longer being exercised? Hopefully in a decade we will have learnt much more about an in built brain mechanism that allows some of the powerful to acquire Hubris Syndrome but not others. I suspect that there is more than one mechanism that triggers Hubris Syndrome inside the brain.

“In a public lecture entitled the ‘Neurobiology of decision making: gender and the exercise of power’, as part of a seminar at the Royal Society of Medicine on 9 May 2017, Professor Trevor Robbins (Robbins, 2017) of the University of Cambridge focused on confidence in judgements, excessive confidence, restlessness, recklessness and impulsiveness. We can all agree that important brain aspects of decision-making resides in the frontal lobes of the brain.

“He covered a lot of ground but put an emphasis on chronic stress as part of the aetiology of hubristic decision-making. That is very interesting and introduces a different angle. Hitherto, there has been a belief that the dopamine system which originated in the mid brain could be involved with hubris. Confidence also does something for the dopamine system. We know, for instance, that dopamine receptor binding also goes up in individuals with high relative to low social status. Essentially Robbins characterises decision-making as an effortful and stressful activity and that power will involve intense decision-making. He goes on to argue that chronic stress depletes serotonin in the brain, and studies show that under conditions of serotonin depletion “reversal learning” gets impaired (ie the ability to reverse on winning strategies when the strategy starts delivering losses). So he is outlining a stress model of hubris syndrome and cites the fact that “If you deplete serotonin in the monkey brain … you have colossal deficits in reversal learning. So the monkey will continue to take the previously-rewarded option, which is now punished. They’re rigid in their decision-making behavior.” He says, “Serotonin has something to do with the flexibility of your decision-making, and it’s responsive to stress.”

“He then states that “The Hubris Syndrome could be a rather inevitable consequence of chronic risky decision-making under stress.” As well as this focus on serotonin and stress he also covers the general role of the frontal lobes. “Frontal lobes are the organ of uncertainty and doubt. They are the organs which are cutting back on your tendency to be too confident.” He says of dopamine and reward and social dominance, “there is something about dopamine and power, if you like or social influence, at least in monkeys.”

“What Robbins is indicating is a stress model for hubris syndrome. Much more work will need to be done. Serotonin pathways originate in the mid brain in the raphe nuclei and innervate widespread regions of the cortex. The frontal cortex in rats has, what Robbins describes as, “the executive power from its back projections to control the level of activity in the serotonergic neurones.” Robbins concludes with the hypothesis “that the Hubris Syndrome could be a consequence of deficient decision- making under chronic stress.” A little bit of stress he says is good, probably improves decision-making, but too much will deplete the system.”

“I have no doubt that stress is the factor most commonly found in all people in power. If we can do more research into its linkage to hubris it offers a very real opportunity for improving decision-making. Those close to people in power, their wives or husbands or other family members, can go direct to these individuals and urge them to reduce stress. Professional advisers can explain in scientific terms when excessive hours of working, travelling, particularly across time zones, and the exclusion of hobbies, sporting activities and leisure, can do to their decision-making. Destressing these individuals’ lives will not be easy but it is achievable.” 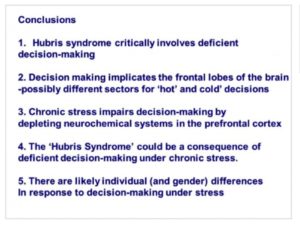