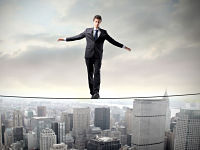 It is easy to blame failed leaders of having suffered from hubris; but …their ‘crime’ is not bringing about the failure … but of not winning the goals we appointed them to achieve, and whose hubris is that?

He begins by discussing contemporary interpretations of hubris and the Surrey Hubris Project’s attempts to develop a hubris prevention toolkit.

Robinson reviews what the Project calls the ‘black hole’ of hubris and comments on the high levels of subjectivity involved in assessing the syndrome.

“Each of the italicised words (in Owen and Davidson’s symptoms of hubris syndrome) implies a value judgement. By whom should such a judgement be made and when?”

Robinson also discusses the ‘magnetic attraction of risk’, drawing particularly on comments made by British mountaineer Rebecca Stephens at the Power, Gender and Hubris conference held recently at London’s Royal Society of Medicine.

At that event Stephens, the first British woman to conquer Everest, noted that “a small but consistent proportion of climbers experience “summit fever”. They become myopic, focusing on the achievement of the goal at the expense of taking into account the risks that might cause them to fail; show an increased tendency to ignore or to break rules that they have previously acknowledged without question; behave more selfishly and tend to fail to listen to or to heed advice. As Robinson notes, “these tendencies are, of course, very similar to those of hubris syndrome.”

The author concludes that “the line between appropriate and inappropriate risk-taking is a very narrow – almost certainly an invisible and shifting – one.

“It is both easy and comforting to blame the failed mountaineer, the CEO of a bankrupt insurance company or bank, or a Prime Minister embarrassed by the failure of her electoral strategy, of having suffered from hubris; but to do so is to guarantee that the same kind of failure will be repeated. Their crime, if crime it is, is not so much one of bringing about the failure of their business or political strategy but of not winning the goals that we appointed them to achieve, and whose hubris is that?”

Read the full blog here: Because it’s there June 2017