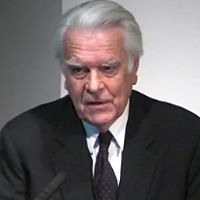 “I should start with one of the most charismatic politicians of the 20th Century, Franklin D Roosevelt. He was not a consensual figure; he knew how to hate… he was hubristic in the sense that many politicians and leaders are hubristic but I don’t think he ever developed Hubris Syndrome…. (because) in his life he had people who he encouraged to disagree with him.”