How having power is like having brain damage: a new book explains why systems fail (2018) 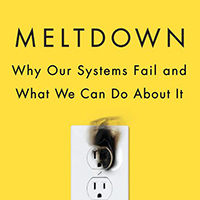 A new book, titled ‘Meltdown’ aims to look at the complexity of “failures”, from catastrophic disasters, to mundane mistakes, and how their commonality can be dealt with in order to avoid future ordeals.

“…Neuroscience shows that [a] desire for conformity isn’t just the result of peer pressure. It is wired into our brains.”

In one experiment, it was observed that “when people went against the group, there was a surge in activity in brain regions involved in the processing of emotionally charged events. This was the emotional cost of standing up for one’s beliefs; the researchers called it “the pain of independence.”

“When we shift our opinions to conform, we’re not lying. We may not even be conscious that we’re giving in to others. What’s happening is something much deeper, something unconscious and uncalculated: our brain lets us avoid the pain of standing alone.

“These results are alarming because dissent is a precious commodity in modern organizations. In a complex, tightly coupled system, it’s easy for people to miss important threats, and even seemingly small mistakes can have huge consequences.

“It turns out that the effect of being challenged — of having your opinions rejected or questioned — isn’t just psychological. Research shows that there is a real, physical impact on the body. Your heart beats faster and your blood pressure rises. Your blood vessels narrow as if to limit the bleeding that might result from an injury in an impending fight.”

“This primal fight-or-flight response makes it hard to listen…”

Research cited in the book “suggests that even the faintest sense of power — being in charge of something clearly inconsequential — can corrupt. And it’s just one of many studies drawing the same conclusion. Research shows that when people are in a position of power, or even just have a sense of power, they are more likely to misunderstand and dismiss others’ opinions, more likely to interrupt others and speak out of turn during discussions, and less willing to accept advice — even from experts.

“In fact, having power is a bit like having brain damage. As [Dacher] Keltner put it, “people with power tend to behave like patients who have damaged their brain’s orbitofrontal lobes,” a condition that can cause insensitive and overly impulsive behaviour.

“When we are in charge, we ignore the perspectives of others. This is a dangerous tendency because more authority does not necessarily equal better insights. A complex system might reveal clues that a failure looms, but those warning signs don’t respect hierarchy.”

Read the full extract via here: How having power is like having brain damage: a new book explains why systems fail