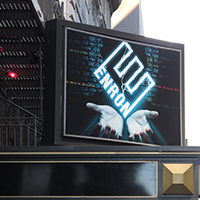 New research from scientists at the Ariel University in Israel has indicated the hubristic tendencies of employees at the now-ceased Enron energy company, by analysing the email corpus of the company via a text mining algorithm.

“Hubris is a known risk for leadership failure. We show that hubristic tendencies can be detected semantically ex-ante in textual reports, and offer a novel methodology aimed at detecting real-time hubristic propensities.

“Whilst both Enron’s CEO’s were hubristic, we found Skilling to be typified with severer hubris. Our study is the first to employ NLP real-time analytical process to detect the hubris disposition. Predicated on Enron’s case study, we demonstrate the methodology’s strengths, notably immediate recognition of accumulated symptoms and prevalence.”

Access to the full article requires membership, although request for full citation has been submitted: Managerial hubris detection: the case of Enron