Narcissism and Politics: Dreams of Glory. (2015) 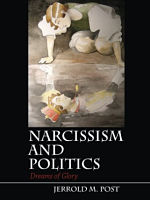 “From Woodrow Wilson and MacArthur to Kennedy and Netanyahu, Hussein and Putin, Post illuminates the links between narcissistic personalities and public life.

“In this age of narcissism, the proliferation of politicians with significant narcissistic personality features is dramatic. Driven by dreams of glory, they seem to find the spotlight that the arena of politics provides irresistible.

“This book analyzes narcissism and politics and systematically explores the psychology of narcissism – the entitlement, the grandiosity and arrogance overlying insecurity, the sensitivity to criticism, and the hunger for acclaim – illustrating different narcissistic personality features through a spectrum of international and national politicians. It addresses the power of charismatic leader-follower relationships, as well as the impact of age and illness on leaders driven by dreams of glory.

“Investigates the motivations beneath the facade of grandiosity.”

Text from the publisher’s preview.

Buy the book from the publisher here: Narcissism and Politics