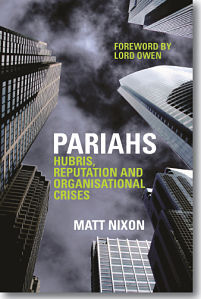 “…the picture often painted … of widespread criminality, immorality and incompetence in (Pariah) businesses is at odds with the day-to-day reality of life in them.

“In the last few years repeated scandals have rocked the worlds of many industries.

“Stories hit the headlines about things such as deliberate cheating by car makers to evade emissions tests; LIBOR and FX manipulation by bankers; falsification of drug testing results by major pharmaceutical corporations; and many similar activities.

“Although it may not be obvious what has gone wrong, or who is at fault, the result can be a catastrophic loss of trust and sense of betrayal.

“Having had a privileged insider seat in several of the firms which became widely disliked, Matt Nixon concludes that the picture often painted in the public narrative of widespread criminality, immorality and incompetence is at odds with the day-to-day reality of life in such businesses.

“In Pariahs: Hubris, reputation and organisational crises, Matt Nixon explores why organisations can lose their trusted reputations and become ‘Pariahs’. He goes on to suggest how ‘Pariah’ firms can become acceptable again and how those working inside such organisations can cope with those who question their choices.

“In particular he examines the effect of the hubris of organisational cultures and leadership, and explores the vital role that the employees can play in both causing and stopping Pariahs forming.”

Note: as a special launch offer, ‘Pariahs’ is also available at the discounted price of £17.50 only from www.Libripublishing.co.uk Quote the promotional code PMN (case sensitive) at the time of purchase.

In the UK, P&P for single copies is free.