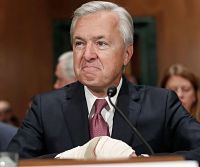 “When a congressional hearing flayed Wells Fargo CEO John Stumpf for failing to stop employees setting up phony accounts for customers… he seemed utterly unable to read a room.”

“Over time, leaders lose mental capacities – most notably for reading other people – that were essential to their rise.”

“…When various lawmakers lit into John Stumpf at a congressional hearing last fall, each seemed to find a fresh way to flay the now-former CEO of Wells Fargo for failing to stop some 5,000 employees from setting up phony accounts for customers.

“But it was Stumpf’s performance that stood out. Here was a man who had risen to the top of the world’s most valuable bank, yet he seemed utterly unable to read a room.

“Although he apologized, he didn’t appear chastened or remorseful. Nor did he seem defiant or smug or even insincere. He looked disoriented, like a jet-lagged space traveler just arrived from Planet Stumpf, where deference to him is a natural law…

“….after years of lab and field experiments, Dacher Keltner, a psychology professor at UC Berkeley found that subjects under the influence of power…acted as if they had suffered a traumatic brain injury – becoming more impulsive, less risk-aware, and, crucially, less adept at seeing things from other people’s point of view.”