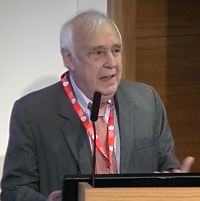 “We often talk about the effects of power without bothering to define it. … The topic is often restricted to the psychological effects of power on people, how they succumb to hubris etc. … I’d like to discuss three definitions of power: blunt power, agenda power and ideological power.”

From ‘Power, gender and hubris: success and arrogance as risks to leadership in health care and beyond’ conference
Royal Society of Medicine, London, 9 May 2017.

Watch the video: Lord Skidelsky: Introduction on the concepts of power

Robert Skidelsky is Emeritus Professor of Political Economy at Warwick University. His three-volume biography of John Maynard Keynes (1983, 1992, 2000) won five prizes and his book on the global financial crisis – Keynes: The Return of the Master – was published in September 2010.

He was made a member of the House of Lords in 1991 (he sits on the cross-benches) and elected a Fellow of the British Academy in 1994.

How Much is Enough? The Love of Money and the Case for the Good Life, co-written with his son Edward, was published in July 2012. His most recent publications were as author of Britain in the 20th Century: A Success? (2014) and as Editor of The Essential Keynes (2015).