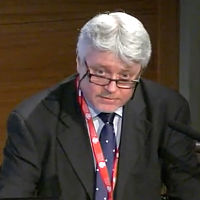 Professor Douglas Cairns, University of Edinburgh,  discusses the classical definition of Hubris. He describes how it was defined by the great classical thinkers, in relation to temperament and law, and how it relates to modern morals.

Watch the video: Hubris in classical myth and morality

“Hybris is not primarily a religious offence or a form of overweening pride, the ‘fatal flaw’ of ‘tragic heroes’, that elicits the indignant retaliation (nemesis) of the gods, but rather a way of going wrong about honour – of misjudging the balance between the respect that other people owe us and the respect that we owe them.

“Hybris is not just a phenomenon of myth, literature, and drama, but a familiar feature of the messy world of social and political life.

Paradoxically we get some of our most valuable insights into what hybris looks like in practice when we consider its attribution to animals and plants. Here, its representation as a force that wells up inside until it can be contained no more and ‘bursts out’ helps illustrate the subjective side of hybris as an aspect of human motivation ….”

Douglas Cairns is Professor of Classics at the University of Edinburgh and a Member of Academia Europaea. He works on Greek society and ethics, especially the emotions.

His books include Aidôs: The Psychology and Ethics of Honour and Shame in Ancient Greek Literature (1993), Oxford Readings in Homer’s Iliad (ed., 2001), Body Language in the Greek and Roman Worlds (ed., 2005), Bacchylides: Five Epinician Odes (2010), Tragedy and Archaic Greek Thought (ed., 2013), Emotions between Greece and Rome (ed. with Laurel Fulkerson, 2015), Sophocles: Antigone (2016), and Emotions in the Classical World: Methods, Approaches, and Directions (ed. with Damien Nelis, 2017).

His work on hybris includes entries in the Blackwell Encyclopaedia of Greek Tragedy and the article ‘Hybris, Dishonour, and Thinking Big’ in Journal of Hellenic Studies, 1996.