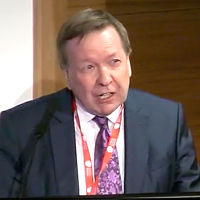 Professor Trevor Robbins discusses the hubris syndrome and its critical involvement in deficient decision-making. Professor Robbins also makes observations on how damage to the frontal lobe, gender and chronic stress have effects on decision-making.

Watch the video: Neurobiology of decision making, gender and the exercise of power.

Relatively little is known about how social authority is mediated by the brain. However, the executive functioning of the frontal lobes provides a useful model for understanding the importance of control over environmental contingencies and the resolution of conflict.

Neurobiological benefits of control are particularly evident in the regulation of the impact of stressors on the individual, but may also have intrinsically rewarding properties.

One possible cost of exerting authority is that its operation may be degraded under conditions of stress (for example, resulting from exposure to a profusion of problems requiring difficult decisions).

Speculatively, this may be manifest in part as the ‘hubris syndrome’, an acquired personality disorder that often afflicts politicians (and probably others in positions of authority), with serious consequences for society.

Trevor Robbins is Professor of Cognitive Neuroscience, being elected to the Chair of Experimental Psychology (and Head of Department) at the University of Cambridge, from October 2002. He is a Fellow of the British Psychological Society (1990), the Academy of Medical Sciences (2000), and the Royal Society (2005). He received the Distinguished Scientific Contribution Award for 2011 from the American Psychological Association.

He has published about 750 full papers, with an H index of about 164. He has co-edited eight books, most recently Translational Neuropsychopharmacology (Springer, 2016). Trevor directs the MRC/Wellcome Trust-funded ‘Behavioural and Clinical Neuroscience Institute’, the mission of which is to enhance translation from basic to clinical neuroscience.

His interest in translation began with his co-invention of the CANTAB computerized neuropsychological battery, which is currently used in over 700 institutes and clinical centres world-wide.

He stepped down as President of the British Neuroscience Association in 2011 and was made a CBE in the New Year’s Honours list of the UK. in 2012. In 2014 he shared the ‘Brain Prize’ of the Grete Lundbeck European Brain Research Foundation, the most valuable in neuroscience. In 2015 he received the ‘Lifetime Achievement Award’ of the British Association for Psychopharmacology. He has recently been awarded the Gold Medal of the US Society of Biological Psychiatry.