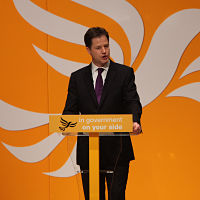 “…hubris (is) baked in the cake of politics … you reach for the stars and often fall flat in the mud.” Nick Clegg, former UK deputy Prime Minister.

“Was it an act of hubris on the part of David Cameron to call the EU referendum? Undoubtedly.

“If you are in government, you are in control and it would seem almost impossible to operate without at least appearing hubristic, even if you actually aren’t… and if you’re too timid you spend all your time worrying that you might fall flat on your face and nothing happens. I, like every other politician, have committed hubris – it’s kind of baked in the cake of politics that you reach for the stars and often fall flat in the mud.

“Is there a role for humility in public service? Yes, but it’s a very different thing. If you are the leader of a political party you are at the service of the people who elected you. But equally, people expect leaders to lead, and to make judgements and say “right, we’re going in this direction” so it’s a very odd blend of hubris and humility which pull in opposite directions.”

“Award-winning historian and broadcaster Bettany Hughes considers changing ideas about hubris on a building site, at an ancient Greek palace, in literature, aboard a replica of Sir Francis Drake’s Golden Hinde and in contemporary political office.

“Bettany explores hubris with experts from the humanities and sciences, people who see these big philosophical ideas playing out in their own lives including archaeologist Michael Cosmopoulos, classicist Paul Cartledge, historian Anna Whitelock and former Deputy Prime Minister Nick Clegg.

“Bettany travels to a new archaeological excavation Greece to see where these ideas were born and then explores the street markets, churches, offices and homes where they continue to morph and influence our daily lives, including The Fellows’ Library at Clare College in Cambridge, the replica of the Golden Hinde on London’s South Bank, and in a recording booth where Nick Clegg is recording his memoir Politics: Between the Extremes.”

Listen to the programme here: The ideas that make us – hubris

Listen to another episode in the series on narcissism: The ideas that make us – narcissism