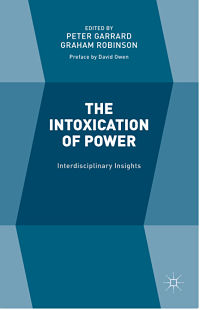 Assembled from papers presented to the two first Daedalus Trust conferences, this new book offers perspectives on leadership hubris from business, neuroscience, psychology and other disciplines.

“Leadership Hubris has been blamed for the failures that arose in the wake of the second Iraq war and the global economic crisis that followed the banking bail-outs between 2008 and 2010.

“The Intoxication of Power, with a Preface by David Owen, is a collection of contributions from thirteen authors who are business leaders, neuroscientists, psychologists and others from various academic disciplines. The contributors all share a concern for the development and understanding of the nature and origins of leadership hubris, and of ways in which its negative consequences might be mitigated.” (Publisher’s preview)

‘In the era of globalization, multinational corporations, increasingly complex healthcare systems and the massively resourced wars on drugs and terror, this welcome publication addresses vital questions: how does power corrupt, is it the norm to be susceptible to arrogance with success, how should we vet, facilitate and govern our leaders?’ – Prof. George Ikkos, President Royal Society of Medicine Psychiatry Section 2012-13

‘The exercise of power can be associated with overconfidence, excessive narcissism and hubris. Such behaviours will have toxic effects for individual leaders and their organisations. This book is timely in offering a pragmatic inter-disciplinary approach to leadership pathologies by authoritative contributors in raising awareness and promoting evidence based research.’ – Prof. Nick Bouras, Emeritus Professor of Psychiatry, King’s College London

‘This important book searches for causes of personal failure within the individual’s psyche. It makes the case for personal development and careful preparation for positions of high responsibility. Its message for tomorrow’s leaders is: the Sun is not your problem; it is how well prepared you are for the heat. This is as much up to you as it is to your mentors. A reading of this book will help.’ – Sir Bob Reid, Chairman ICE Futures and ICE Clear Europe. Former Chairman and Chief Executive, Shell UK Limited; former Chairman British Rail; former Deputy Governor of the Bank of Scotland

Buy the book here: The Intoxication of Power

Print the flyer to share with colleagues: The Intoxication of Power[3]

“It’s a fantastic set of scholarship and a must have for anyone interested in the field. Not cheap, but worth every penny.” Matt Nixon, Principal at Disraeli Group