The psychology of power: temptation at the top. (2014) 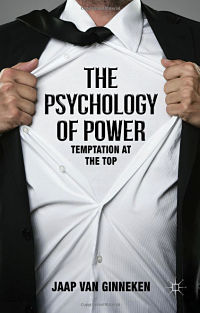 “scrutinizes some of the best-known politicians… (and finds) all gave in to a slightly amended version of the seven temptations or mortal sins..”

“This book tests the disquieting hypothesis that our most powerful leaders acquire strange quirks at the top, making them take unnecessary risks.

“Van Ginneken scrutinizes some of the best-known politicians of the largest western or G6 nations over the last half century, when they approached or reached the highest executive office, such as Berlusconi, Bush, Clinton, Kennedy, Reagan, Thatcher and others.

“All gave in to a slightly amended version of the seven temptations or mortal sins: Lust or sexual obsession, Gluttony or substance abuse, Greed or hidden corruption, Wrath or power abuse, Denial of mortal illness, Denial of Folly or mental disease, and Pride or over-confidence.

“…this study examines the psychological forces tugging at the top level of political leadership.” (from Amazon preview).

“Millions of pounds are spent on researching risk factors in banking and business with complicated models and statistical analysis. What is missing is a large contribution from the biological and social sciences.

“This book written by a psychologist has the virtue of being written in an attractive, arresting style with compelling case histories.”