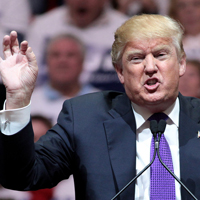 “In the case of President Trump, researchers conclude he is an ’emotionally unstable innovator’.”

“In the case of President Trump, researchers conclude he is an ’emotionally unstable innovator’.”

“We…employed a new method that uses machine learning and other computer science methods to analyse characteristic language styles, contents, and patterns that together can reveal remarkably valid information on a person’s personality profile.”

In the first study¹, “researchers compared the online personalities of the wealthiest entrepreneurs with those of the most powerful CEOs.”

“In their second paper², …researchers took a closer look on probably the most prominent and powerful person in their sample, Donald Trump.”

“We also found Trump scored relatively high in neuroticism….We could identify a personality pattern in Trump that makes him so distinct from the superstar entrepreneurs and CEO’s in that he really seems to resemble a type of an emotionally unstable innovator.”

Read the full article here: Using tweets to decrypt the personality of Donald Trump and other powerful people (2017)