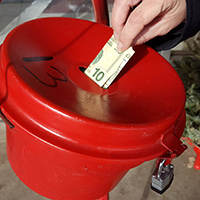 “Firms that engage in corporate social outreach should make sure to send consistent signals.”

Is a company donation to a charity or philanthropic financial provision a sign of sincere altruism or a means of managing public perception?

“If a corporation is seen as contributing to positive social change, it becomes that much harder to vilify it in the public mind – or so the reasoning often goes.

“Taken to a cynical extreme, this logic could turn companies into pious sinners, attempting to skirt accountability for their questionable conduct through conspicuous prosocial activity.

“But where senior management might see a balancing of the scales, outsiders may detect hypocrisy.

“Rather than an indicator of prosocial orientation, unusually robust or sudden philanthropy could be interpreted as a sign of bad conscience.”

A recent study by the Wernicke finds that “…companies sending mixed signals on social issues are more likely to receive a harsh media spotlight than a halo.”

“Companies may sow cognitive dissonance if they try to present themselves as good citizens by acting prosocially, while at the same time lavishing compensation packets perceived as excessive on their CEOs.”

Wernicke and fellow researchers involved in the study “…speculate that firms with a demonstrated commitment to philanthropy are particularly sensitive to how they are portrayed in the media. They view prosocial outreach at least partly as a reputation-building exercise.”