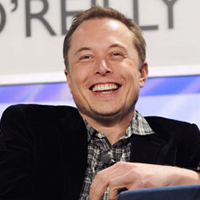 “The more power and influence you have, the less interested you will be in pleasing other people and in keeping your dark side in check.”

“There is no questioning the fact that [Elon] Musk’s talent for entrepreneurship, defined as the ability to translate original and useful ideas into practical innovations, is truly outstanding.

“And yet there is also an evident other side to Musk, which has recently manifested — rather often — in his combative engagement with investors, the media, employees, and social media and in his seeming difficulty with accepting criticism.”

“This pattern of behavior…undermines his leadership qualities.”

“The successful-entrepreneur-as-difficult-person stereotype is so entrenched that many people assume these difficult traits are what cause entrepreneurial success. In fact, it’s far more likely that exceptionally talented people like Musk, [Howard] Hughes, [Steve] Jobs, [John Paul] Getty, and [Tim] Armstrong succeed despite these traits.”

“While these ‘dark side’ behaviors don’t cause success, success can definitely exacerbate them….The more power and influence you have, the less interested you will be in pleasing other people and in keeping your dark side in check.”

“…Research indicates that a little bit of egomania is not just common among high-performing leaders but also beneficial. But there are two problems with this: First, these benefits disappear during difficult and complex times. Second, a large number of leaders display much more than a small amount of narcissism once they meet with great success.”

“…Four psychological factors pose a risk to derailing entrepreneurs once they finally achieve the long-awaited success:

In order to manage the above four psychological behaviours in leadership, the authors detail three specific attitudes to keep in check:

Read the full article here: Why great success can bring out the worst parts of our personalities