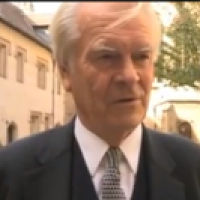 An introduction to the concept of Hubris Syndrome and how it manifests in leaders. “.. I’ve grown increasingly worried about … the way in which decisions are made … by leaders, and the tendency to develop what I’ve called Hubris Syndrome.

Lord David Owen, former Minister of Health and Foreign Secretary. Author of The Hubris Syndrome and  Trustee, the Daedalus Trust.

“.. I’ve grown increasingly worried about … the way in which decisions are made … by leaders, and the tendency to develop what I’ve called Hubris Syndrome.

“(This is) basically a hubris that develops, in the absence of any psychiatric illness, from people you might call normal. (They’re) elected by the body politic as leading politicians, or chosen to be chief executives of companies.

“Everyone thinks they’re going to be good and they often start off well and then they get carried away. They get narrower in their vision, they are less and less interested in other people’s views. If they do have cabinets they get rid of them or effectively sideline them and they start taking decisions very much on their own. They begin to believe that only they can make decisions so they become very hubristic.”