Inclusive leadership: a framework for the global era (2015) 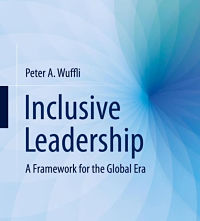 “…leaders no longer understand global financial ecosystems’ complexity… fragmented actors make millions of decisions in isolation …finance and capitalism have decoupled from economic value and the values of civilisation itself. Tomorrow’s leaders must think more inclusively to solve these challenges.”

Adapted from the Forbes review by contributor Brook Manville:

Wuffli was forced out as CEO of UBS, one of the world’s biggest banks, in 2007. On reflection, Wuffli reasoned that his misfortune was a small piece of a bigger world problem, a broad-based ‘failure of imagination’ – leaders everywhere not understanding the complexity of global financial ecosystems, and the unintended consequences of so many fragmented actors making millions of decisions in conceptual isolation.

He also felt that finance and capitalism more generally had become decoupled from economic value and the values of civilization itself: the pace and complexity of change outstripped the trust of human institutions.

What was needed were ‘partner-like’ leaders who thought more inclusively about their work, social roles, and connections to people and knowledge outside their jobs.

Wuffli argues that tomorrow’s leaders will combine three dimensions of thinking and acting; a ‘One World Perspective’ (understanding and integrating across boundaries, organizationally and globally); commitment to ‘New Capitalism’ (meeting society’s demands for more ethically responsive markets); and ‘Liberty-centric Ethics (pursuing the ‘good life’ that balances freedom of choice and personal responsibility).

Buy the book here (available by the chapter): Inclusive leadership.