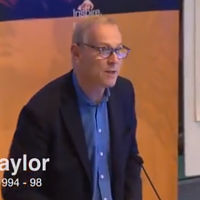 Taylor, Martin, “The love of power does more damage than the love of money … of all the avenues .. a teenage daughter is the most successful puncturer of a CEO’s fantasies

View the video of his address below, or download his remarks here – MartinTaylorRemarks

“I’ve been asked to talk about he pressures on senior businessmen and what makes them go off the rails. I’m not just going to talk about hubris … but about rather more commonplace forms of failure, because there is a spectrum.”

“The love of power does more damage than the love of money“ said Martin Taylor in a fascinating and candid overview of his experiences in the highest levels of management. He commented that of all the various avenues a leader could call on to retain a grip on reality, “a teenage daughter is the most successful puncturer of a CEO’s fantasies.”