The profile of political leaders: archetypes of ascendancy (2016) 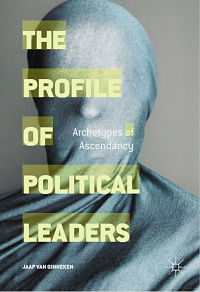 “In our choice of, and support for, leaders, we still seem to be guided by unconscious or instinctive preferences.”

“By analysing a wide range of empirical research into leadership, this book provides a composite portrait of frequent characteristics, such as personality and demeanour, that influence both the success and popularity of political leaders.

“Through the lenses of mass psychology and collective behaviour sociology, the author offers fascinating observations on political leadership which reveal a coherent pattern.

“In our choice of and support for leaders, we still seem to be guided by unconscious or instinctive preferences. Evolutionary psychologists have labelled this ‘CALP’ for ‘Cognitive Ancestral Leadership Prototype’. Length, symmetry, face form, voice pitch, eye blinking and more turn out to play a role – even today – alongside personality and style.

“Each chapter of the book offers a case study to illustrate these observations, including Barack Obama, Ronald Reagan, Nicolas Sarkozy, and Boris Johnson.”

Access the book (available by the chapter) here: The profile of political leaders.