Guest Blog: There are no positive aspects to ‘Hubris’. 2015 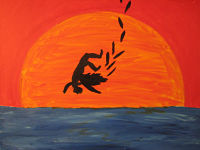 “… while some positive qualities may be attributed to related concepts and .. good self-esteem and …proportionate pride in one’s achievements is welcome, hubris has no positive connotations and is unacceptable under all circumstances!

Nick Bouras, Professor (emeritus) of Psychiatry at the Institute of Psychiatry, King’s College London. Prof. Bouras is Coordinator of the Daedalus Trust and Chair of its Research and Development Group.

Another in an occasional series of contributions from members of our Advisory Board and other friends of the Daedalus Trust. Published online 1 June 2015

It is stated increasingly that, in addition to negatives, there are some positive aspects to hubris. In contrast, we will argue that we should adopt the ancient Greeks’ meaning of hubris whereby there are no positive features, only negative.

Hubris was a key concept for the ancient Greeks. It could be found mainly in political action, but also in physical, military and financial affairs when citizens acted in arrogant, insulting or violent ways against others. It referred to behaviour that implied belief in one’s ability or intent to exceed human nature and challenge the gods. Both state laws and especially divine law imposed limits to human action and forbade such behaviour. Where such limits were flaunted, the offender would be expected to suffer ‘nemesis’, ie. the rage and furious retribution of the gods. Hubris is usually perceived as a characteristic of an individual rather than a group. Nevertheless, the group the offender belongs to may suffer consequences from the prohibited and offending act too.
Hubris in Classical Greek thinking often indicates a loss of contact with reality and an overestimation of one’s own competence, accomplishments or capabilities, especially when the person exhibiting this is in a position of power. Today, according to the Daedalus Trust, hubris is defined as ‘exaggerated pride, overwhelming self-confidence and contempt for others’. The ‘hubris syndrome’ – overconfidence in one’s own judgement and contempt for others – is considered to be an acquired personality change triggered by access to, and the exercise of, power over a period of time. If we adopt the ancient Greek meaning of hubris as it is reflected in this contemporary definition, there cannot be any positive features but only negative.

Hubris should be distinguished from related concepts such as ambition, confidence, pride, arrogance, egotism and narcissism. Some of these, such as ambition and confidence (and in the case of youth, a measure of arrogance) undoubtedly have legitimate positive connotations. Indeed, in Nichomachean Ethics, Aristotle argued effectively that ‘pride’ is a virtue, along with others such as ‘courage’, ‘liberality’ (generosity), etc. Reasonable pride, which is consistent with one’s sense of dignity and actual achievements (and which we might choose to call today ‘good self-esteem’), should be distinguished from egotism, which overestimates one’s contribution and legitimate claims and causes offence to fellow human beings but is still a lesser provocation than hubris.

Narcissism is a more complex term, sometimes used interchangeably with arrogance or egotism. Certainly we all have a need to be recognised, respected and cherished for who we are. And yes, ambition and competitiveness may be conceived as powerful spurs to endeavour, achievement and social contribution and therefore potentially beneficial. However it is difficult to see how narcissism, which refers to a compulsion to be admired as a reaction to a felt lack of genuine esteem, could be the same. Even so, narcissism also never reaches the level of offence and provocation that hubris does.

In conclusion, while some positive qualities may be attributed to related concepts; and while a sense of dignity, good self-esteem and – coupled with creativity, family and social contribution – proportionate pride in one’s achievements is to be welcomed; hubris has no positive connotations and is unacceptable under all circumstances!

A fascinating paper explores further the “full measure… of the dangers that hubris poses for democratic societies. …hubris not only offends against the equality and moral dignity of others, but threatens the political domain more broadly by eliding plurality and undermining the conditions necessary for deliberation, good counsel, and shared political judgment.”

Access it here: “Hubris breeds the tyrant”: the anti politics of Hubris from Thebes to Abu Graib