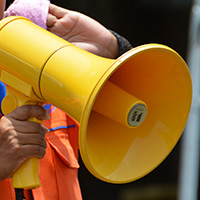 “…Silence is pervasive in organizations due to the widely shared belief that speaking up about sensitive issues is futile or even dangerous.”

“Those working in HR departments have the responsibility to assure that people are treated fairly at work.

“But they may not give an employee’s complaint the attention it deserves when it is targeted to powerful executives, as a way to protect both the executives and also the company…an unfortunate consequence of not taking action is that more harassment is likely to take place later on as the perpetrators know they can get away with their behavior.”

“When a person is in trouble, others who are present often fail to intervene, whether because they assume other people will or because they think it’s not their place to act” (known as the bystander effect (pdf)).

“We’re especially likely to follow others’ actions when there is ambiguity about the appropriate way to behave. Other people’s behavior can clarify the social norms of a given situation, which can lead us to act in a similar way” (pdf).

“…Silence is pervasive in organizations due to the widely shared belief that speaking up about sensitive issues is futile or even dangerous. Consequently, organizations need to convey to employees that they will be protected and valued…”

“By doing so, leaders can encourage those who are being mistreated to find their voice.”

To read the article in full, follow the link: Why it’s so hard to speak up against a toxic culture